Man Of The House

Disclaimer: This is an opinion based on observations. I am not, by any means, judging anyone in particular. I do not support acting like a wife prior to being a wife either.
So...here goes.
In the age of reality television, especially the "Wives" of whoever, we get a glimpse into peoples lives that we wouldn't ordinarily have a chance to see. We get to see wealthy, well off, kept, gold digger, resourceful women interact in staged situations that create drama for our entertainment. One of my favorite shows is "Love & Hip Hop". I love this show because it highlights different aspects of the "music industry" as it pertains to hip hop and R&B. We get to see 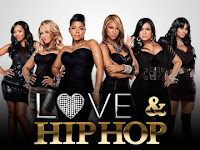 women play their roles in this industry: a manager, a mother, a long time girlfriend, girlfriends/baby mothers, a friend, an aspiring artist, and a struggling artist. Oddly, Love & Hip Hop does not boast any wives. I guess that's why it's not called "Hip Hop Wives". LOL! Anyway, I bring up Love & Hip Hop because one of the girlfriends, Chrissy, has been asked "What do you do?" or told "You're just a girlfriend" because she doesn't necessarily have a job/profession or a "hustle" as some like to say that is displayed on the show. This made me think about how society has changed. Some may say we have progressed, but to me, we've just changed.
Why is it such a big deal that Chrissy's boyfriend works to take care of his family? Is it a bad thing that he considers her a part of his family? Morally speaking, they should be
married but, if they were married, then the question would remain the same. I mean, what is the traditional husband/wife role anyway? Husband takes care of household by being a provider, wife takes care of husband by keeping the household in tact. It's in the bible, right? In the age where more and more women are getting college educated, the ratio of single mother's has increased as well, right along with men who are incarcerated. Although I am educated and have a career, I would gladly give up "Professional" for "Homemaker". I contribute to my household, financially, but my husband is still the "Man of the House", making final decisions and taking the lead when he should. I know my role as the wife. I speak my piece, but in the end, I submit. (Also in the bible)
While independence is championed, we fail to teach our daughters how to be wives. Therefor, our daughters don't know how to let a man be a man in his own house. Then, we criticize women who choose homemaking over a salary. Our school system used to teach Home Economics, now a lot of women don't even know how to boil an egg. Could it be because their mother was at work and possibly too busy to teach them how to cook? When a man finds a wife-or in Chrissy's case, girlfriend- he finds a good thing, says the bible. Don't be so quick to judge someone else's situation, especially when you do not know the true dynamics of it.
"Independent" women, if you are wondering why you are single, take a step back and evaluate yourself. It can't possibly be that EVERY man you've dated is a lying, cheating dog who just wasn't that into you. Is it possible that, as an independent woman, you aren't letting him be a man and take care of you the way he was designed to do?
Anyway, I hear that Chrissy is now engaged to be married. Congrats, girl! We're happy for you. Check out that ring!